I have one computer but wish to switch between 3 or more routers using a wired connection. I have my normal router, a StreamLocator (VPN), and an old router I wish to install DD-WRT on. Rather than plugging and unplugging my computer’s wired connection I’d like some sort of switch, ideally one that could be near my monitor/mouse/keyboard location. The computer and routers would be in a rack in a corner where it is not easy to get to without moving a lot of items. Even a sort of bridge where I could keep my computer ethernet plugged in and then switch out a single cable connecting to each of the routers would be fine. I do have a TP-Link PoE splitter and PoE injector, and a Ubiquity switching mode PoE/lan power supply if any of those could be configured to work. Thoughts?

What are the functions of each router?

My provider supplied router does the majority of work for my computer, entertainment devices, IoT. The StreamLocator allows me to watch UK tv channels; BBC, ITV, etc. Then I have an old router I wish to play around with. I’d like to have the capability to switch between them for various things and as a learning tool.

Would this work for you?

100% brand new High quality rotary switch No power required No additional software needed Easy to use and install Hot-swappable (no need to reboot computer) 1Gbps (CAT6) support Can be mounted on a wall Brand new and high quality RJ45 8P8C...

That’ll do! In my cart right now, thanks!

Glad to hear my friend

I’m a bit late on this one, but here’s another thought: what about having your 3 routers at 3 IP addresses on your local subnet, and you switch between them by reconfiguring the default gateway on your computer? I’m not really sure about the point of having the 3 routers, so perhaps you could elaborate on what you’re trying to accomplish.

Thanks, I actually bought the switch Ben suggested and it’s working great.

Glad you found a solution. I’m still curious about what you were trying to accomplish with 3 separate routers on your network.

I’m sure there are easier solutions and possibly none was really needed. I have a StreamLocator router I use to watch UK television. I sometimes have difficulty with sites that my normal, provider-supplied router doesn’t have. It’s a new product I chose due to its moderate cost and free years’ worth of service that sometimes has problems on their end. I also have an old router I want to experiment with DD-WRT and my minuscule knowledge and abilities mean it’ll take a while for me to do that. Or brick it, as the case may be. And actually I like have multiple options available to me. I’m a hobbyist so my lack of knowledge and experience causes me to ask questions to problems that may not exist!

I was also thinking similar with a powershell script to configure the interface but he’d have to have three nics. Not impossible but USB nics aren’t great.

I’m still confused at the original goal. I was envisioning something like this: 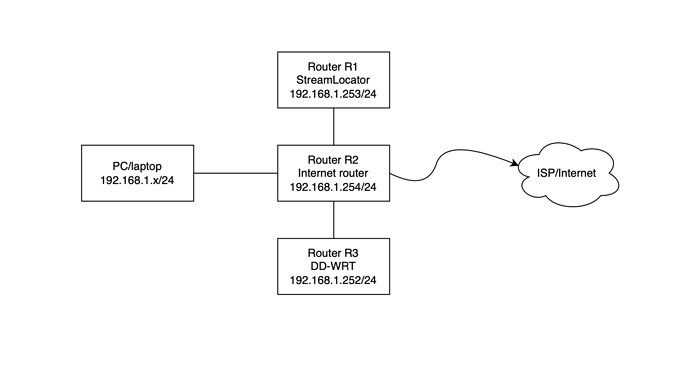 Now, with the StreamLocator setup I propose here, you do potentially end up with a bunch if ICMP redirects (I did when I did something similar), but it does work.

Double-NAT is also a possibility, and might be a better solution here. I double-NAT today, and have for nearly a decade. I double-NAT because I really hate AT&T’s router, and I don’t like AT&T’s router doing scans onto my home network – so my Ubiquiti USG is the only device the AT&T router sees.

Like I said earlier, maybe I just don’t understand the goal, but I do know that a lot of networking can be done without moving cables around.

Due to my lack of knowledge this is a solution I didn’t think of. Thanks!

I’m not a network engineer, but I did choose a .net domain for a reason.

Happy to help if I can.