Do you use them?
I’m much more of a mouse user than keyboard so I don’t think they would work for me. Is that a fair conclusion?
I really like the look of them. Though it would be a challenge to learn and change how I use a computer.

Before switching to Ubuntu 20.04 LTS + Gnome (which I still use as a window tiling manager), I used i3wm. It’s pretty amazing! I would have stuck to i3 if there wasn’t a DE (desktop environment) alternative with window tiling (Gnome + pop shell) and being able to keep ALL my keyboard shortcuts.

I’m not sure how easy moving away from window tiling would be because my workflow is so much faster since switching to a window manager. In fact, the battery life of my mouse literally increased 4x to 5x because I don’t use it at all to switch workspaces, windows, launch apps, close apps, view all workspaces, etc. It becomes time-consuming and slower with a mouse to use a full DE vs. a WM like i3.

Here’s a screenshot of my previous i3wm setup: 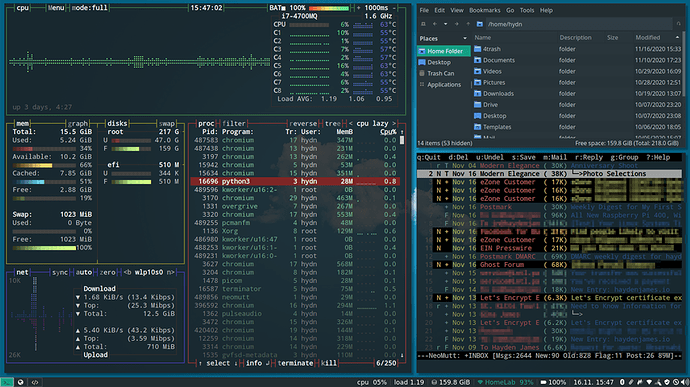 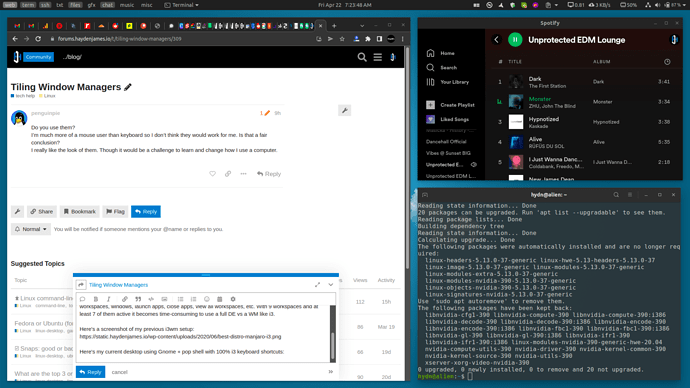 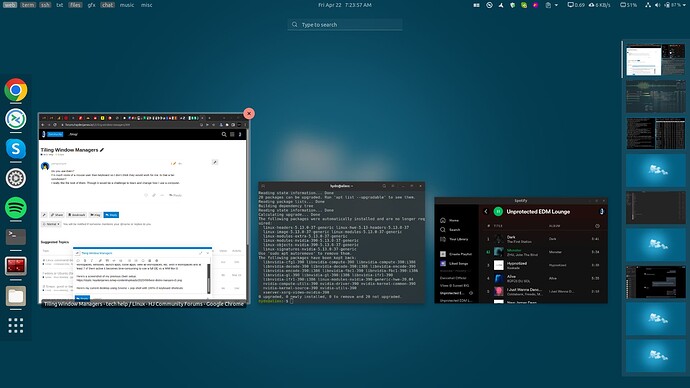 To answer your question, yes, if you prefer taking your hand away from the keyboard to use the mouse, then a tiling WM won’t be the best option for you. Also, it becomes ingrained in you, so if you switch to a tiling wm, it’s difficult to revert and now feel handicapped or to still punch in keyboard shortcuts out of muscle memory.

Shortcuts are edited via dconf, so for example the shortcuts to move an existing window to another workspace: 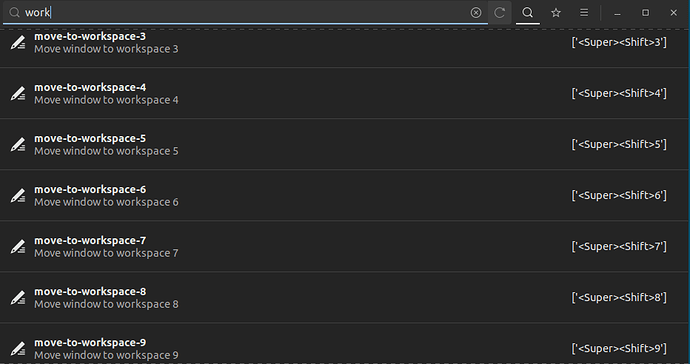 Hope this helps! If it does, don’t forget to mark as solved.

I am the same way but I was playing around with it and I think it is something you can adjust to. I use a lot of shortcuts for my drawing tablet so maybe it comes easier for me, not sure.

Either way, you will know your comfort zone and your limits when it comes to computers. I get not wanting to or feeling as though you can’t change after years of only using a mouse and minimal shortcut keys.

I tried to make use of them because I play around a lot with graphics and video editing but honestly, I just couldn’t get the hang of it. I might give it try again after reading hydn’s reply. I mean it seems like it is worth it if you can get used to it.