Has anyone used Gnome 42?

I’m trying it out on the Fedora 36 beta and it seems very nice so far, everything is fast and beautifully designed. I’m just wondering how long it will take for themes to be a thing again, Libadwaita is really locked in. At least it’s nice.

Hi tried it briefly, but running Fedora 42 or Arch is a bit too bleeding edge for me due to time constraints.

Honestly, with gnome extensions, I’m able to achieve so much customization. That said, Ubuntu 22.04 LTS (launches on the 21st of April 2022) will ship with Gnome 42 so I can upgrade to access when ready.

Not yet. I was planning on playing around with it this weekend but family stuff got in the way. You know how holiday weekends can be sometimes. I am going to see if I can get it going next weekend.

I was messing around with it a bit. I tend not to stick with anything whilst it is still under beta and will do a dual boot setup. From what I have seen/tried, I like it. Once it is out of beta, I may use it on one of my laptops. (Assuming it can run it) I would much prefer to use it on Fedora personally over Ubuntu.

For anyone wanting to see it in action without an install:

I am now running Gnome 42.2 as part of a standard Ubuntu 22.04 installation. To date, touch wood, no issues encountered and works pretty much as expected.

I have a couple of extensions enabled to make things work the way I like, namely:

How does Awesome Tiles compare to Pop Shell? Have you used both? I’ve been using Pop Shell since moving away from I3wm for full Gnome DE.

No I have not really put any effort into Pop Shell. Though after taking a quick look at it I might have to, as I too was trying to bring back some of the things I was missing from switching away from I3wm.

I’ll let you know my thought once I’ve had time to try it out.

Had a brief play around with pop shell but it seems that there are some issues straight out of the box on Ubuntu 22.04.

The pop-launcher does not get installed as it is not packaged as part of pop-shell. It looks like you can build it from source or possibly use an alternative such as rofi/wofi or ulauncher.

There also seems to be some issues with the key mapping that gets setup. As far as I can tell the pop-shell install tries to remap all of the things that it believes are applicable but there is still some weird behaviour around the move and set focus actions.

As it is still usable I will persevere for a bit and see if I can sort out the niggles.

Thanks for the follow-up. Good info. Correct, I’m not using pop-launcher. I just hit super and begin to type.

I set up key mapping using dconf editor. So it’s about 95% the same shortcuts that I had with i3.

Here’s a screenshot of my current extensions (I’m also on Ubuntu 20.04 LTS, for now): 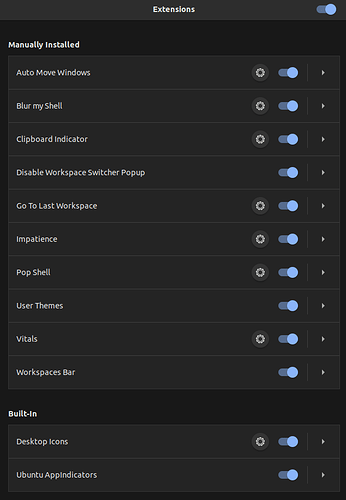 Here’s my desktop - feel free to share yours in this thread also.: 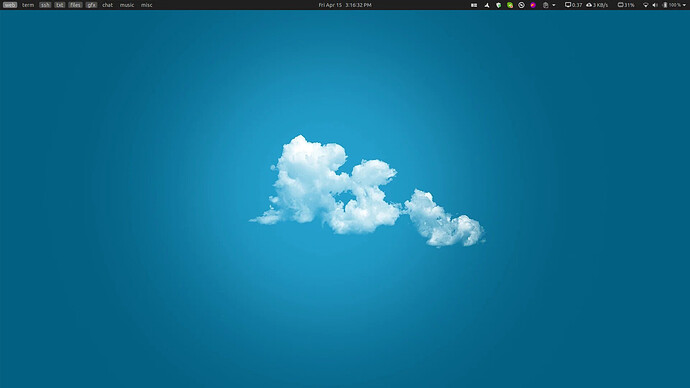 I was on POP!_OS previously but I didn’t like the faster/shorter update cycle so I ended up on Ubuntu LTS. But will be changing to rolling Kali without the pen tools next.

Yes I use Gnome 42.3 (one of the perks of using testing) what do you have questions on?