I've given up on Unifi! - Alternatives?

And for something that’s spec’d similarly to the middle tier of the Peplink dual-wan ‘Balance’ line - there’s Luxul’s Epic 5 (and ostensibly w/o all the add’l ‘licen$ing’ needed to ‘unlock’ additional hardware features - and perhaps sense enough not to name their product something that wouldn’t be easily confused w/ a children’s toy) - which has a decent Cavium Octeon Dual-Core 1.7Ghz MIPS64-based/2GB DDR3/8GB eMMC (i.e. CPU/HW specs that they haven’t gone to considerable effort to hide - ala what can be found here: https://fcc.report/FCC-ID/U8G-P1X09A/4487610.pdf) - and for less than half the price of the $1k Peplink Balance Two (which although it has 2x the amount of RAM @ 4GB DDR3 - I’m thinking that a $15 SODIMM swap-out could perhaps even things up a bit there as well). 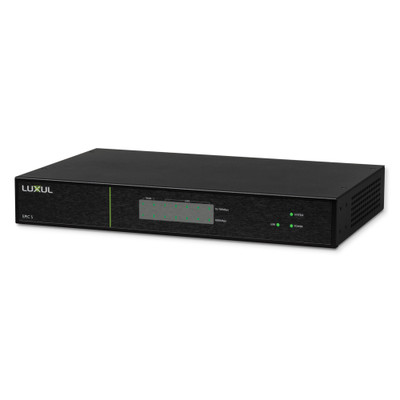 (And for any of the Mikrotik masochists out there who enjoy perpetually restoring from backup - I have an RB4011iGS+5HacQ2HnD-IN that you can have - just pay the ‘shipping & handling’ of say 20 bucks - so that I never, ever have to type/find that damn model name ever again to copy/paste into a forum post (I guess I’m just a naive ‘beginner’ though when it comes to understanding why a company might use ‘auto-generated passwords’ in place of descriptive product names

It’s interesting that you mentioned a weak CPU on Peplink. I had a local computer vendor stop by my house, and we looked over my Balance 20’s set up. I left the admin console open for a couple of hours after, and, from time to time, the real-time CPU load bar spiked into the red for a quarter second or so. I have no idea why (beyond my skill level). I didn’t notice anything performance wise on my Windows 10 computer as these red-spikes came and went.

The router’s set up is minimalist. No VPN, firewalling, and local admin only. It’s a home office setup that my wife and I share, so I imagine our loading on the router is less than others might experience.

Yeah, I was mainly targeting some of their ‘higher-end’ hardware-debilitating/license-locking models in my colloquial semi-rant - but as Mikrotik has proven repeatedly - it’s no use having a decent quad-core CPU when the software (when it’s not pilfered from 'nix) can’t make use of it in any sensible way. And in the ‘software’ category, it does seem that Peplink has some slightly more interesting innovations, i.e. “Speedfusion” - but after timing out after the first year, you have to basically pay what I’m imagining is a pretty substantial recurring annual fee (if not at/near purchase price) to make that proposition continuously worthwhile. And it isn’t just Peplink that’s under-powering their tech - look at every single TV manufactured in the last 15 years - even while cramming just about every imaginable tracker-laden, bloated stalker app that fits on cheap embedded storage, there isn’t a single CPU worth bench-testing in the mix. Anyway, although I don’t love how much ‘phoning home’ happens w/ my Unifi/Ubiquiti gear - at least I’m not paying any recurring licensing fees to get decent aggregate throughput - even when I crank up all the available DPI/stateful firewalling/country-blocking features on the UDMP.

Oh, and if I would have been paying more attention yesterday, I might have also caught this little nugget:

Anyway, might want to go with a Balance One + $100 BPL-ONE-LC-SF license in that case…

For me, the Balance 20x looks amazing or even the Balance 30 LTE. I like having the cellular as a fail-over. Plus the expansion slot for the future/5G. Esp during hurricane season. The data plans I have are 60 and 50 down for carriers A and B, so it’s more than adequate.

Personally, for LTE - I’d rather have something ‘dedicated’ for that, i.e. if I’m relying on that for any sort of ‘failover’ - it’s difficult to imagine that somehow being functional if the whole unit catches fire - no matter how “amazing” it looks (provided one can actually see how “amazing” it is with all these letters that PepLnk’s sending to the FCC :).

…And don’t even get me started on Intel’s processors/what happens when all the mitigations for Spectre V.2 are in place…If there have been any flaws in my arguments here - it’s not that the devices that we’ve been discussing here are any worse (they’re actually much better w/ the Broadcom/Qualcomm chipsets…) than all the things that connect to them, i.e. just b/c there’s the potential for utilizing something like a 10Gb/s network connection - doesn’t automatically mean that my 10 yr old Lenovo w/ a v.2 core i3 proc can actually get anywhere near 1Gb/s - for instance, even w/ an add-in card - I’m still CPU-bound at ~400Mbit/s currently on avg. w/ all the other stuff i might be doing on any given day.