I've given up on Unifi! - Alternatives?

For the past 4 or 5 years, I’ve used Unifi for our home networking needs. This includes routing, switching, hotspots and surveillance. However, when recently trying to buy another EdgeMax 10x router, they were out of stock and are still out of stock. The same for a huge chunk of their inventory.

What about Amazon? Have a look:

So what alternatives do you guys suggest for an almost enterprise-level home network? Aruba, Ruckus, Meraki, Aerohive, Cambium, Cisco, TP-Link, other?

On Unifi’s store they even have this popup: 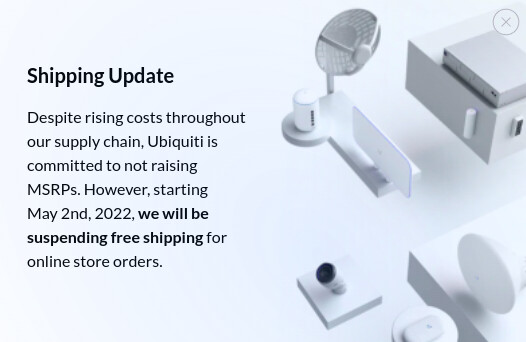 Netgear has great alternatives. I have used a lot of their items over the years, the big one being their wifi extenders. I have issues with pillars in my house where the wifi signal gets interrupted so it has been a huge help for me. I believe we use Unifi networking where I work.

TPlink is also a good brand. Their Omada series is similar to unifi but most people say it’s better.

I’m a little concerned about not being able to replace UniFi equipment when it dies. After months of staggered purchases, my entire network is now Ubiquiti: USW-Lite-16-PoE at the core, USW-Lite-8-PoE at my desk, USW-Flex-Mini in the mancave, 2x U6-Lite-US (one on each of 1st and 2nd floors), and a USG. It’s a great setup, but boy am I concerned about replacing dead hardware… so much so that I have thought of getting a spare switch, AP, and USG – just in case…

I’m in the same boat.

Just about everything is Ubiquiti. The thought never crossed my mind about not being able to access replacements.

I recently got a Firewalla Gold because of the VPN capability on the ER 10X is hackish’ - OpenVPN is slow and getting Wireguard to work was lines and lines in the router config that I don’t want to have to set up again.

So for a while, I was using this AMAZING budget-friendly Brume router (there’s a good supply on Amazon) for Wireguard. It’s fast but meant having two routers because of the lack of ports. So I will eventually replace the Edgerouter/Brume with the FWG.

As for the hotspots, it looks like I’ll be keeping them. I am running the Unifi controller on one of the Lenovo’s.

For security cams, I like what I see from Lorex. Check this out:

I used to just lock myself in with one provider for all my home and office needs but I am learning this is not such a good idea these days. I too was using mainly Unifi but I am trying to find better options without sacrificing anything (especially for my security setup). It has been a pain.

I used to have several different network devices from several different manufacturers, but I decided that the UniFi single-pane-of-glass configuration management setup was nicer, so that’s why I went that way. I think the only real reason it’s a concern today (for me anyway, not sure about @hydn) is because of the supply chain issues. The devices do bounce in and out of stock… it’s just a question of their supply matching up with your need. I have a few non-Ubiquiti devices still (not part of my network today), and for now I will consider those as spares. They are all unmanaged, but they’ll work with VLAN1, which is the main need.

Have you had a look at Mikrotik? For example the rb4011igs_rm

I personally like MikroTik, and have a hap ac. It’s a great little system, but it isn’t the easiest to configure. If you get into their way of thinking, though, it’s not that bad. I never got trunked VLANs working on it, though…oh well. It’s one of my spare systems, the other being a Synology RT1900ac.

Just this morning I learned about Peplink. Much more enterprise and a wider array of products compared to Ubiquiti. Some of the routers and AP have really good online reviews.

I’m looking into the Balance Line from Peplink. For example Balance-20x. This allows for dual-wan load balancing and a 3rd ISP via 4G or 5G sim card.

The full lineup is here, they also offer WiFi APs.

Yeah, but are they in stock?

Ok, so far Amazon had most of what I looked at. Also, eBay has a lot of new listings which is hopeful. I didn’t check their list of official distributors yet though.

I will say this, Netgear used to be way better than it is today. Maybe I am being too picky or whatever but I feel their overall quality has gone downhill in the last 10 years and I can’t honestly recommend them for a lot of their products. Some are still fine but if you look at reviews online, they get mixed ones across the board.

Amazon has the Balance 20x in stock.

I second Mikrotik, although their UI can get very confusing very quickly and it is not very kind to beginners. But my CRS125-24G is the best switch I have ever had. Currently looking for new brands to up my network to 5 or 10 gbps.

TP-Link is good for the price and I love my Archer AX90, but I’m very glad I run it as an access point and don’t have to rely on it for anything else, as their firmware seems pretty bland. I set up OPNSense on a cheap used PC and it has taught me a ton and always delivered.

Just to make sure I understand, you would recommend Peplink, yes?

Yes, I recommend Peplink. It works. Never a problem. The admin interface is straight forward. Balance 20 Dual Wan is my only experience.

“not very kind to beginners” - I like how you said that.

It’s totally true. Once you get past the learning curve, it’s great. I got most of the way there, but as I said I never got some things to work. Earlier I said it was VLAN trunking that I didn’t get working, but I don’t think that was it – I think it was that I never got multiple WLANs working. Anyway, whatever. It’s a great solution and I like it, but for now I like UniFi better. We’ll see what I think when I can’t find replacements for my devices…

MikroBrik is awful/configurations are waaay too ephemeral…I was having to ‘netinstall’ every time I sneezed practically. Besides that, to get anything like content filtering to work pretty much required the use of a 3rd party (I think they’re called Lucidview or something…and even that offered not much more than ‘spreadsheet’-like rudiments…). Peplink is what? a cool grand for a dual-wan that does a pretty subpar ~1gb/s aggregate? And what’s the processor in that? Is that 1gb/s going to remain steady once routing/VPN/whatever poor implementation of DPI gets turned up? MikroBrik’s rb401’s at least had a somewhat capable processor (if not anything close to software that could effectively scale - and what’s with their ridiculous ‘love affair’ w/ Microsoft, aka “WinBox”?? - ‘netinstall’, or whatever they’re calling it now was hardly anything like a substitute for folks who run 'nix on anything they can/abhor dependency on the shockingly privacy-invading nonsense that is Windows…). If you’re patient (and can wait like a week - and aren’t trying to nab something like the ridiculously underpriced Flex switch…) then nobody touches Ubiquiti for sheer bang for the buck. If I’m going to be dropping a grand on anything - it would be Unifi’s mission critical - which can be loaded up with a crap-load of batteries when the power goes out - which it certainly does where I live when the trees start getting blown around while the soil has lost it’s firmness. Plus - none of these companies has done anything even remotely useful w/ access control, and to me, that natural extension into an ‘ecosystem’ isn’t something I’m liable to discard just because I can’t get an overnight replacement (In a pinch, as some have mentioned - Best Buy has just about enough “Netgears” to get me up the hill until i can shift into Unifi again). Shortages/supply chain issues will eventually subside - and ‘free shipping’ was never something sustainable - without other consequences, i.e. the people that do all the ‘shipping’ for us shouldn’t have to work for ‘free’ either.

Welcome to the forums! Thanks for joining in.