I’d like to start off by thanking @hydn for the opportunity to enter and win this FWB+.

I really enjoy homelabbing and playing with Linux (Servers/Networking devices). I have a few mini PCs, Raspberry Pis and other devices around the house that I thinker’ with.

In 2020, I discovered Firewalla, and this company had everything I wanted in a Firewall, a beautiful phone app and web interface.

I was hooked, I’ve always wanted a Firewalla device but I had a hard time justifying the price tag as I’ve been accustomed to open source firewalls such as Pfsense and opnsense. While Pfsense is great to use, I found that trying to fine-tune the IDS/IPS in pfsense was a PITA and also monitoring blocked traffic/allowed traffic in the logs was decent at best (slow to load)
thus my decision become clear, I needed a firewall that just worked!

I’m here to say that the price is worth it. The features built into the phone app are amazing and the control over traffic is great! The process was really simple, plug and play as described. No issues at all, and within minutes I had a better insight into my network and what device was calling what. I really like the groups feature. it will allow you to group devices together and apply rules to them, very easy to use.

I set up the FWB+ on my IOT/DMZ network. The network consists of a GL.inet router, FWB+, Raspberry Pi and a mini PC. I use this network for the following devices: security cameras, Nest, Wifi outlets, and my Linux test servers.

My favorite feature about the device must be the network monitoring, activity upload alerts and quarantine feature.

Monitoring my network has been a breeze with Firewalla. I can monitor my ping, bandwidth and daily Speedtest. It helped me identify that my internet speed was really bad in the afternoon (3 pm). Also, it helped me figure out that my VPN provider was the reason for my high ping, thus crappy Zoom calls. I also use it to monitor my linux servers. Sometimes, I need to grab a older container off docker hub and random other projects off git, with the flow feature, its really easy to see what ip the vm/container is reaching out too!

Getting alerts on activity is a must for a modern firewall. This was my biggest issue with opensource firewalls, I would get alerts via email, but could not take action. This is where the Firewalla shines as I can block the traffic from the alert.
One thing I noticed was how much data these off-brand cameras upload to the cloud and ping back home. I was able to block some of these requests for fun, but no harmful requests ever appeared. I also tested out some games on my phone and firewalla was able to detect and alert. The device does need some time to ‘learn’ what the sites are, but otherwise, much better than other firewalls.

The quarantine feature is great! I’ve always wanted to restrict access to my network via hardwire or wireless but never could with other firewalls. With Firewalla, it’s such a breeze as it’s done automatically. The best part is, that I can unblock a device from my phone, without logging into a PC. With Wifi password sharing being so easy these days, I love the fact that I can control access to the network.

I do have one small issue, at times, the notifications from Firewalla are delayed. If an upload alert occurs at 12 pm, I might only get a notification at 1:30 pm, which kind of sucks.

Also, I couldn’t get routes to work with my VPS Wireguard network. Trying to route my 10.10.10.x address out the WG client on Firewalla didn’t work.

Overall, I really loved the device and it’s been a great addition to my home lab. I will post a pic of my home lab tomorrow, just need to clean it up,

Great write-up. Will be helpful to many. How do you find the performance of the UI? How long does a reboot take (downtime)? Any noticeable drop in internet speed when enabled? I have bookmarked this thread.

I’ve used the UI a few times, but it works great. it does take a bit of time to load (maybe its cloud syncing) but it works well. I do find myself using the app more (never knew I needed an app so bad before this).
The reboot is very quick, maybe 1-2 mins tops. I noticed no drops at all. I have a 200/10 line and I get all the speed with the FWB+

. The only thing slowing me down is my VPN, but since this network is for IOT, I dont mind at all. I really like that I can monitor my devices via the app, its amazing.

I want to know more about that product, Firewalla will have to wait until I get more money (as everything else I want

does ) but does sound like a great idea, maybe even a future Christmas gift for a couple of people I know.

Great review, I really think about a firewalla box for quite some time now… What I want is great insights to my home network and a usable app for the mobile phone.
Right now I use OPNsense and the Unifi Network App, but I want to be able to better monitor and filter what’s going on. Thank you, great writeup

Welcome to the forum. Same here on my end. I want to be able to view more real-time and also usage trends daily, weekly etc. Also historical data by domains, security events, etc. Currently unifi does not provide that much unless maybe I used a USG but not convinced I want to go further down that Unifi path.

Here is a updated picture of my homelab. 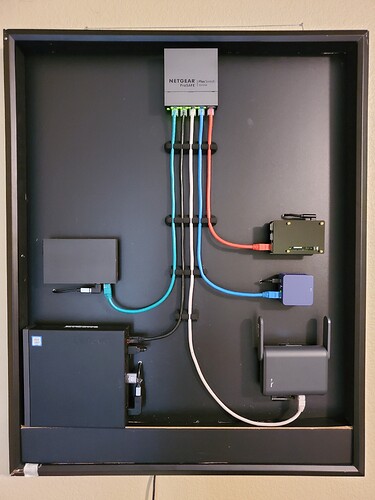 My homelab has been sitting in a bookshelf for a few years, and it’s been fine, until we recent had two little toddlers. They’ve been yanking my homelab apart, disconnecting the internet, etc.

So I had the idea of mounting it on the wall.

Shadowbox is 24inx30in, backboard is from Home Depot. I created that little bottom box/shelf to hold the power adapters.

This Shadowbox is just a temp, I have a new one to replace this one. I used the broken one as a mock setup.

Internet is provided by a Gl.inet SlateAX router.

I still need to fix the wires and make it prettier but I thought I’d share with you guys.

looks amazing. what are you using to hold the network cables against the wall?

I bought these cheap wire organizer clips off Amazon

And I used these double sided wall hooks / “clips” to mount the devices. They are very sticky and I’ve used them for the last year or so. They’re very hard to take off once you stick them on. 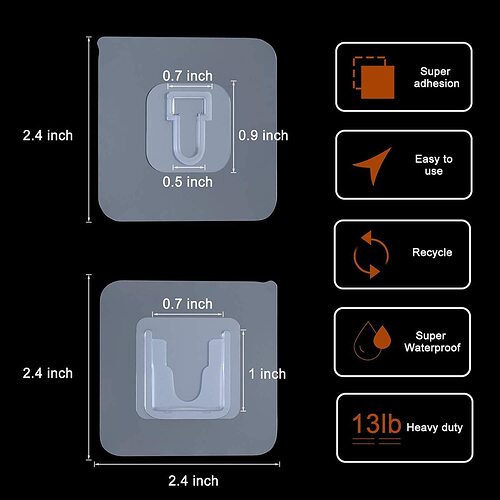 Freeking awsome, Ben! It looks amazingly good, and I love how all the connectors could be read by tilting your head. Inspirational.

And, it’s nice and simple.

sigh Someday when I’m all growed up I’ll be that creative. Looks nice Ben.

this looks so cool! can’t wait to build stuff like this when I grow up lol

It only took 2 months of thinking about the idea to actually purchase the items. I think I spent like $100 bucks total.

I had some of the stuff laying around the house.

I love this look, @Ben ! Congrats. I have thought of wall-mounting the few items I have that are on the shelf below my rack, but it’s only 2 ATAs so I don’t really care – it looks okay the way it is. But wow, I just love your setup!